In recent times, the name Josie Pace has been popping up in our social media news feed and suggested YouTube watching. She is the epitome of a punk riot girl, looking to knock you on your arse with her no nonsense, industrial rock music and style. Pace, after a raft of singles, has signed to Negative Gain Records, released her debut album, IV0X10V5 and is about to go on tour with Aesthetic Perfection and GENCAB, so there is no better time to talk to Josie about what has lead up to this point.

You are from Detroit City, home of Motown Records and Alice Cooper but to name a few musical wonders that have sprung from there. Did this have a huge influence on you throughout your childhood?

Detroit sound has definitely influenced me throughout my entire musical journey. Glenn Frey in The Eagles was a huge writing influence on me. Growing up listening to them shaped the way that I structure my songs. A lot of Motown, Stevie Wonder, The Temptations, Aretha Franklin, influenced me very young as well. I remember my entire family jamming in the car to “Superstitious” by Stevie Wonder when I was maybe 7. Small moments like that really solidified my desire to be an artist. Another Detroit band that has influenced me quite a bit is Jack White continues to create fresh, unique, and meaningful music. He has even influenced a lot of my newer songs as well.

What is the alt rock/darkwave scene like in Detroit?

The dark wave scene, while still a bit of an underground genre, is small but strong. I feel we are very dedicated here in Detroit and we all know how hard it is to get to the next level, so we help each other in any way that we can.

Josie, you posted a video on YouTube, which was seen by Musician/producer Ken Roberts and since then you have forged a musical partnership with him. What is it like working with Ken and how do you complement each other?

Working with Ken really took off from the beginning. He has been in a few successful bands in the past and I trust him with situations that I am unsure of because of his experience in the music industry. We became very close friends and I can now practically read his mind! We always bounce ideas around and work together to create new music that really pushes the boundaries of not just the genre we are in but pushes the boundaries of art itself.

Do you find he pushes you to delve further into your craft?

I’d say he definitely thinks much higher of myself than I do. Even though staying humble is important, it is also important to give yourself credit where credit is due. Ken believes whole heartedly in my abilities whether it be writing, playing guitar, performing live or shooting photos and music videos.

There have been a number of singles released before the album and 8 of them are on your debut album “IV0X10V5”. Your original tracks seem more synthpop based and become increasingly brash and abrasive, embracing a punk attitude. Do you feel this is true for yourself?

When first working with Ken, we decided that releasing singles and a music video every few months was the best way to gain momentum in the industry. It took a few years to really dive deep into the genre and to try new things and create songs that pushed the envelope. While I love all of the songs, when we decided that it was time for a full length album, I knew that not all of the singles would make the cut. I’ve grown a lot in my art and in myself throughout the years and I wanted the album to be something that was true to my journey. I dove deeper into my writing and pushed myself lyrically. I feel like the album is a more mature reflection of myself. It has a clear sound and each song resonates with me on a personal level.

Two singles were recorded with Sammi Doll, “Perfect Replacement” and the cover of the iconic Placebo track “Pure Morning”. You both sound like you bounce off each other brilliantly, so how did you end up recording with Sammi?

Ken and I are big fans of IAMX and decided, while working on “Perfect Replacement”, that it would be great to collaborate with someone new. We simply sent her an email. Honestly, a lot of the collaborations and the cool things I get to do, were just because we asked. Sammi sent an email back and was ecstatic about collaborating. After meeting up with her and recording the song and music video, we all became good friends. So when we started work on the Placebo track “Pure Morning”, we called her up again. It seemed like a perfect fit and the message of the song, female friendship, really manifested in the music video (especially the bloopers!). Sammi is an amazing friend and such powerhouse and she is so much fun to work with.

Negative Gain is a well-respected label in the industrial scene. How exciting was it to be signed and releasing your debut album with them?

I was extremely excited to be signed with Negative Gain. Being signed to a label was one of my life long goals. After a few Zoom calls with Roger and Micah about possibly working with them, the family oriented approach to their label was something that really stuck with me. I will divulge that when they had agreed to sign us, I was teary eyed. All of the hard work was coming to fruition and it was a big deal for me. I love working with them and we all push each other to our fullest potential.

For me, I got the feeling, the overall theme of surviving against the odds. What does the album mean to you?

I feel like the album, to me, really encapsulates throwing out your doubts and growing from past mistakes, definitely surviving against the odds like you mentioned. It was only after I had finished the album that I noticed a theme, but I feel like that gives it it’s authenticity. I write as a form of therapy so it only makes sense that the years I have been working and trying to push forward in the music industry, came out in my songs.

Which track would you say is your favourite or best represents Josie Pace?

Man, the track that most represents myself? All of the tracks have pieces of me nestled into them. But I’d say the most raw of them that really captured how my head and my emotions take form is “Vicious”. After the sudden and tragic loss of my close friend, Alyse, I wrote everything that was in my head. Every night that I stayed up crying, I wrote to express my grief and my sadness, my emptiness and my confusion, my anger and my acknowledgment that she was taken too soon, too young, too violently. “Vicious” although it shows how much she means to me, it also shows my vulnerability. I was reluctant to release it or to even record it at all. Not only because it was physically hard for me to get through without choking up, but also because it shows a side of myself that is raw and hard to manage at times. “Vicious” is quite literally my emotions through a very hard time in my life. 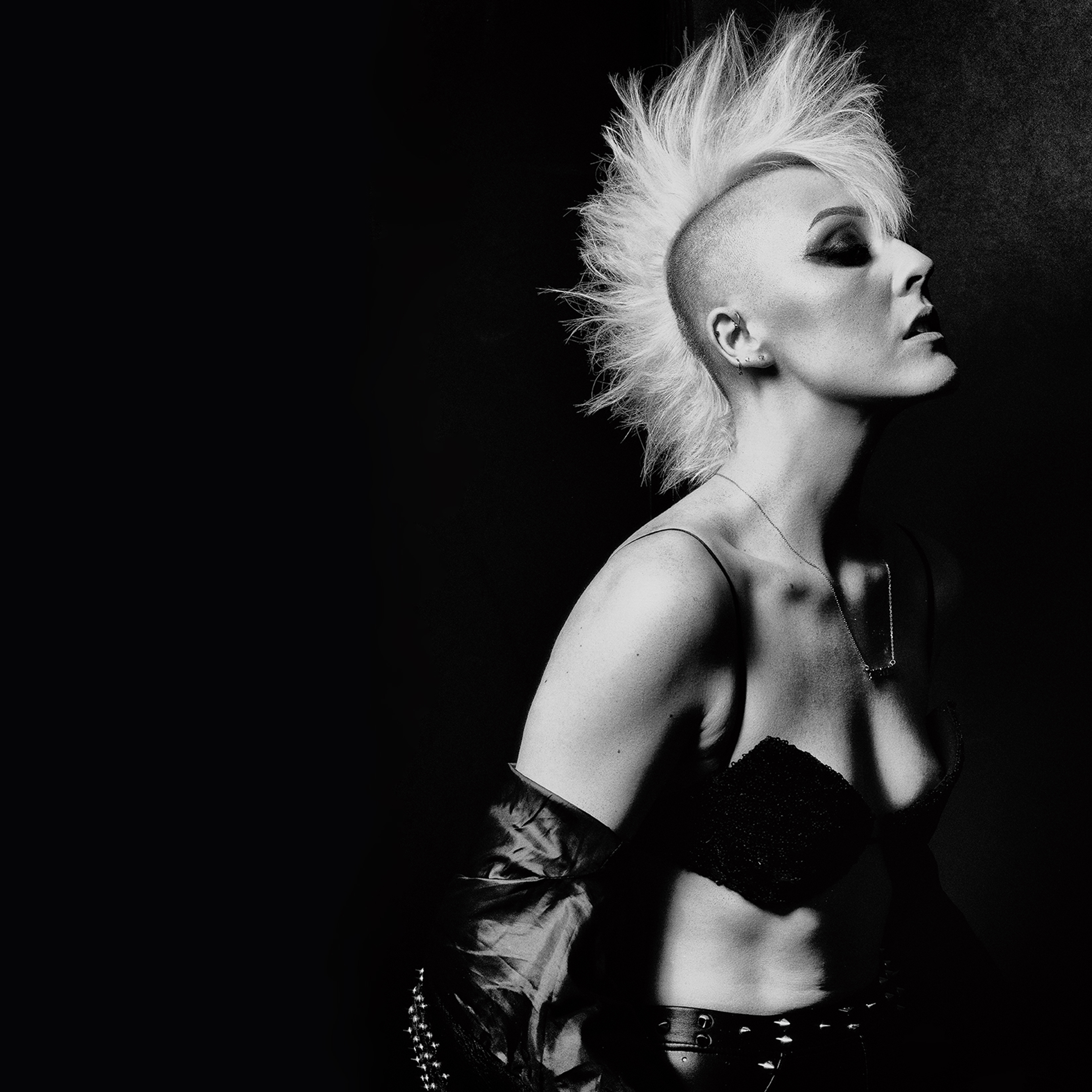 What music was the gateway drug into the industrial rock scene?

I’ve always been into rock, no matter what kind of sub genre. I listen to everything and anything that feels authentic and stirs emotion. The Industrial Rock genre really catches my interest especially approaching it the way that we do. Creating a heavy electronic based sound from songs written on acoustic guitar is a challenge and it also creates a strong song no matter what genre you change it into. Industrial is very messy and heavy but it is also purposive and precise.

Who do you listen to now that gets your blood pumping?

Recently I have found myself listening to Alice in Chains. His voice was so iconic and the song structure is so different. I can really learn a lot from their songs. Other than that I am listening to my own album to prepare for my first North American tour with Aesthetic Perfection and GenCAB. If I don’t get excited listening to my own
music I’m doing something wrong.

Did you miss performing live during the depths of the plague
(Covid)?

Without a doubt. During covid we obviously all had a moment (or ten) of uncertainty and fearfulness of what the future holds. I remember at the beginning of 2020, I hadn’t gone to the studio for at least two months. I remember just siting in my writing room and kind of realizing that the future was so unknown that I had a bit of a breakdown. Obviously, after picking myself back up, I decided to hit it harder and I recorded the rest of my first album “IV0X10V5” and we filmed 6 music videos. Even while doing all of that I missed performing live. The human aspect of performing live can’t be matched, I love getting to meet new fans and feeling the energy of the crowd. It is my favorite part of the artistic process.

Can you tell us about the live shows you are now involved in?

I am absolutely ECSTATIC to announce that I will be joining Aesthetic Perfection and label mate, Gen CAB, for the American Psyco Tour starting in October! We are playing 40 dates throughout the US and Canada. This is my first tour and I am so grateful to be a part of it.

If you could pick one Michigan musician (dead or alive) to record with, who would that be?

I would have to pick Jack White. He has done so much throughout his career and he has constantly pushed the envelope and broken boundaries of genres while keeping a very dirty Detroit feel.

What is in the future for Josie Pace?

While I am preparing for my upcoming tour, I am also working on an EP with new music videos as well. Obviously another full length album is on the way in the future as well. I am hoping to jump the pond when it comes to playing live. Getting to Europe would be a dream.

Thanks for rocking with us Josie!